History of the Ten Broeck Mansion 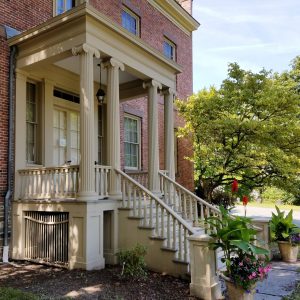 The Ten Broeck Mansion is located on the land of the Mahicans who traded with the Mohawk, the easternmost tribe of the Haudenosaunee or Iroquois Confederacy, in the upper Hudson Valley.  Dutch settlers established trade with Native peoples starting in 1609.  The Ten Broecks and Van Rensselaers were among some of the earliest Dutch families to settle in this region.

Abraham Ten Broeck acquired 5 acres of land in 1764, on a rise known as Arbor Hill since at least 1790.  The earliest inhabitants of this land plot were likely of African descent; these persons (either enslaved or free), planted an orchard and shaped the landscape into gardens for a formal estate for the Ten Broecks.  The Ten Broeck Mansion was built in 1797-98 for General Abraham Ten Broeck and his wife, Elizabeth Van Rensselaer, after a fire destroyed their previous Albany home.  The Federal-style house is attributed to Albany architect Phillip Hooker (1766-1836), sited on sloping lawns with formal gardens,  The mansion, which the Ten Broecks named “Prospect,” commanded a sweeping view of the Hudson River and its daily traffic of barges and schooners.

Abraham Ten Broeck was an influential figure in Albany history.  In 1775, Abraham served as a delegate to the Second Continental Congress. In 1777, as a brigadier general, he commanded the New York Militia at the famous Battle of Saratoga. From 1779-1783 he served as mayor of Albany and member of the State Senate.  He also served as the first president of the Bank of Albany, first president of the Albany Public Library, and as a trustee of Union College.

An important part of the history of the Ten Broeck Mansion is the acknowledgement of the contributions of enslaved persons, servants, artists, and artisans to creating Albany’s history; on-going research at the ACHA allows us to tell more of these important stories.  The ACHA is currently conducting preservation work and expanding exhibit areas to include more spaces used by servants and enslaved persons.

The structure was refurbished and renovated in the Greek Revival style in the mid-1830s.  Thomas Worth Olcott, president of the Mechanics and Farmers Bank of Albany and investor in businesses owned by African Americans, purchased the residence in 1848 and renamed it “Arbour Hill”; the surrounding neighborhood is still known by that name today. The Olcott family, prominent Albany bankers, philanthropists, and supporters of abolition, added the first-floor butler’s pantry and the second-floor bathrooms. They also added a wine cellar in the basement.  Roseanna Vosburgh (1800-1884) was the Olcott’s household manager; during the sixty-four years she spent working for the Olcotts.  An abolitionist and philanthropist, Vosburgh created a charity to serve the needs of African American women in Albany.

The Mansion’s gracious presence spurred new development in Arbor Hill, with a newly wealthy merchant class building homes near their businesses in the neighboring warehouse district.  Free persons or color and abolitionists, and members of Albany’s Jewish community, also settled near the Mansion.  Many of these homes remain today, with the surrounding streets a treasury of Greek Revival, Italianate, and Second Empire architecture from the late 1840s to 1890.  In 1948, the Olcott family donated the Mansion to the Albany County Historical Association.

The Albany County Historical Society was founded in 1942 to preserve, present, promote and interpret the stories of the rich and diverse history and culture of Albany County.  The ACHA offers tours of the Mansion and gardens, free and low cost educational programs for families, schools, and senior centers, cultural events, lectures, and exhibits.  The ACHA is a 501c3 nonprofit educational museum with a permanent educational charter from the State of New York.

Your support allows us to continue our programming.  Get involved and give back: join as a member and contact us to learn about volunteering.